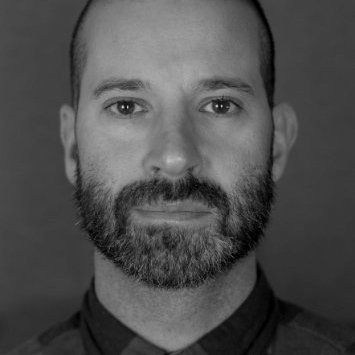 Since its founding in 2004, Foundlight Productions has built an outstanding reputation as a dynamic and adaptable film, music, and video production company. Today, Foundlight specializes in commercial and documentary work for a marquee list of clients including Red Bull, Nike, Vice, and BBC Radio, operating from two U.K.-based studios.

As Foundlight’s owner and director, Alan Stockdale is inspired by light.

“My best ideas come from the moments when the light is hitting an object in a certain way; thus, the name Foundlight. I need tools in my kit that enable me to use light in the most creative ways possible. Products from the Vitec Group, especially Litepanels’ Gemini and Astra LEDs with mobile power from Anton/Bauer, are indispensable in my work.”

Litepanels LED lights and Anton/Bauer batteries played starring roles in a recent project for Foundlight client Schneider-Kreuznach, a leading producer of high-performance photographic and cinematic lenses. The Schneider MOVE Series is a quartet of one-minute films based on movement and designed to showcase Schneider’s Xenon Cine Prime lenses. The Move Series captures the passionate physical expression of four talented individuals: a dancer, a gymnast, a skateboarder, and a free runner (parkour athlete).

For the dancer and gymnast, flexible lighting was critical for creating the mood.

The gymnastics segment was set in a large and busy gym, and Alan had only a small window of time at the end of the day to capture the scene. It was already dark outside so he used Litepanels’ Astra 1x1 LED panels, powered by Anton/Bauer’s all-new Dionic XT cine batteries, to create a daylight look for some shots. The Astra's also offered a powerful tool for creating dramatic effects – for example, illuminating the gymnast’s face with a dimmed-down background or capturing chalk dust flying through the air against the dark.

“I only had three to four hours to get all of the shots I needed, but the Astra's made it easy. They were incredibly portable, versatile and flexible to work with,” Alan says. “Fully powered by the Dionic XT batteries, they were easy to position in any location and gave me the intensity I needed for a variety of scenes. I was also able to clip on accessories such as soft boxes, barn doors, and honeycomb grids to vary the light quality and capture different moods.”

For the dancer segment, Alan used Litepanels’ Lykos compact LED panels powered by mains as well as the Dionic XT batteries. Equipped with the Bluetooth dongle for Manfrotto’s Digital Director remote control system, the Lykos lights were easy to control, even hanging on a long boom high over the dancer’s head.

“For this shoot, lighting was especially important to highlight the dancer’s movements,” Alan explains. “Using the Digital Director app on my iPad, I could adjust the lights’ intensity and even time the lights to change with the music. And I could count on the Lykos LEDs to provide flicker-free output, whether they were running off mains or the Dionic XTs.”

Anton/Bauer Dionic XTs were the ideal mobile power solution for all four shoots.

For all four Move Series videos, Alan relied on the Dionic XT's to power not only lighting but also the Sony FS5 4K camera and Atomos Inferno and Sumo monitors/recorders.

“I’m a longtime Anton/Bauer customer, so I know I can count on Anton/Bauer batteries to provide ironclad reliability and performance. The Dionic XT's really take those to a new level,” he says. “For this shoot, one of the things that was especially handy about the Dionic XTs was the flexibility to use the V-Mount version for the camera and the Gold Mount for the monitors. Plus, the easy-to-read LCD display shows me power readings at a glance, which came in really handy for the fast-paced skate and parkour shoots.”

Alan adds, “I’ve been a big fan of Litepanels LED lights ever since I launched Foundlight in 2004, starting out with the original Micropro panels. My work has taken me shooting all over the world, and it’s been an amazing experience so far. Solutions from the Vitec Group brands like Litepanels and Anton/Bauer give me the flexibility, performance, and power I need to tell great stories and realize my creative vision.” 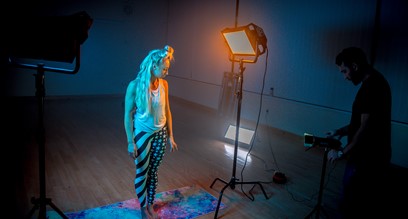 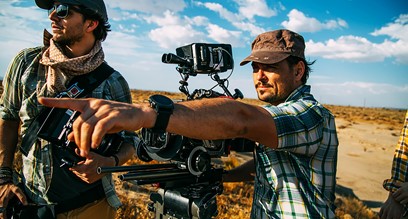