A motorcycle races along the street, the authorities in hot pursuit. Something valuable has been stolen, but what … and why?

All is revealed at the end of 90 seconds of fast-paced, high-octane action. A mini heist movie shot by UK based DP Joe Ransom and G6 MOCO’s Rammy Anwar to introduce Gemini 1x1 Hard, the powerful new addition to the Litepanels Gemini range of RGBWW LED panels.

“The brief was an open book,” says Rammy. “We could do whatever we wanted, as long as we ticked a few boxes along the way, show that the output is bright, and that it can be hard and soft, flicker free, super tough and it can be battery powered.” With the scope wide open, Joe and Rammy made a wish list of creative scenes they would like to shoot and check some boxes of their own. “Who wants to use robots? Everyone! Who wants to use a Russian Arm? Everyone!” says Rammy. “For me it was motorbikes, a bullet time sequence, stunts and a chance to work on something more narrative,” says Joe.

Weaving the wish list of scenes into a narrative story led naturally to a classic heist. “Thinking about the lighting design, we approached it scene-by-scene,” says Joe. “It was actually part of the pitch. We created a scene to highlight each feature, one scene soft, one scene hard, one scene flicker free and so on and that helped us to form the narrative.” He continues, “How do we bring in a bullet time scene? Well, we need a Phantom. What would be interesting to shoot on a Phantom – a fight scene. The idea was storyboarded to present to Litepanels, and the project was on. Rammy brought in producer Zac Hancock, Joe added gaffer Vini Curtis and with Ecstasy or Gold’s Arthur Lewin on board to manage postproduction, the team was ready.

A briefcase inside a vault contains something valuable, and a thief is determined to have it.  Lighting plays a key role in this scene to highlight the mysterious object.  “I wanted to show the controllability of the lights, says Joe. “Because the output from the Gemini 1x1 Hard fixtures is so directional I could get the right projection or angle of the beams to highlight the briefcase perfectly.”  Nine Gemini lights were rigged together above the briefcase to create the look. “I was very happy with that,” says Joe “We created a circle of lights with domed diffusers with a single fixture in the middle with no diffusion.  It gave a hard shadow on the briefcase with super soft ring light around it as well as a beautiful fall off on the back wall.  As the thief makes off along a seemingly endless corridor, Gemini lights in the ceiling fitted with egg crates create the red alert effect of the alarm being activated, while additional fixtures with soft dome diffusers create the soft ambient light of the corridor.

“We created a circle of lights with domed diffusers with a single fixture in the middle with no diffusion. It gave a hard shadow on the briefcase with super soft ring light around it as well as a beautiful fall off on the back wall.”

The action heats up as the thief flees the scene of the crime in a sequence where robots play a starring role both in front and behind the camera. “For me, the hero shot is in this scene, the thief rolling over with the briefcase,” says Joe. A G6 MOCO robot arm captured the action. “We had to rehearse that again and again,” says Rammy “We timed the robot to jump over as a natural move not too slow or too fast. The actor did it naturally, and we tweaked the speed of the robot to match the speed and keep him framed in the center as well.”

Shooting with a Phantom Flex4K high-speed camera at speeds of up to 1000fps for the bullet time scene meant high output, flicker free light was critical. One Gemini 1x1 Hard fixture produces over 3000 lux of output at 10ft/3m. Four Gemini 1x1 Hard fixtures mounted into a Quad Array would provide the crucial light for this scene. “Working with the Phantom, we never had to boost the exposure in camera,” says Joe. “It was all captured natively as we saw it, which was impressive at such a high frame rate. I was darting between the Phantom and the RED Gemini and Komodo cameras, and I didn’t need to change anything manually in them to get the correct exposure. It was amazing.

A grueling night shoot from 10PM to 4AM on a freezing street in the north of England was next. “When we first recced the scene I said to Joe, there are no lights and we’re shooting at night,” says Rammy. “Joe just said, there are lampposts, and we have 20 Geminis, we’ll just stick one there and there.“ Joe adds, “Our lighting team spent the first two hours on set lighting the entire street with Gemini panels, powered by Anton/Bauer batteries, with their output set to replicate sodium vapor lights – it looked amazing, and they worked perfectly.” Joe had planned to use extra lights on the ground but found that the output from the post-mounted Geminis was more than enough. “The level we got was insane,” says Joe. “I was shooting at 50fps – on the RED Gemini using 3200 base ISO I was getting 1.5 stop on my light meter. The output, the shape, the spill, and the look we got was amazing – I tell people we lit that whole scene, and they think it’s just lampposts. No, every light you see is us. That’s a scene I’m really proud of.”

To capture the chase: A tracking vehicle mounted with an Ultra Arm and lights to create the chase vehicle effects. “We did some shots where the car was chasing the bike and others where it was just the bike, so we needed to create the effect of the lights reflecting off the visor and the bike,” says Rammy. “We had the Ultra Arm and six Gemini 1x1 Hard lights, two on the front, two on one side and two on the back so we could flip between them - it worked perfectly.” Weighing in at just over 13lbs (6kg), the Gemini’s lightweight a small form factor belies its intensely powerful output. “My concern was how are we going to mount that amount of light onto a vehicle already rigged with a heavy Ultra Arm,” says Rammy. “I thought we were going to need huge rigging and suction mounts and we would only use 2 or three, but when we got the lights, they were so small and light we ended up using six and the car was fine.”

“We had the Ultra Arm and six Gemini 1x1 Hard lights, two on the front, two on one side and two on the back so we could flip between them - it worked perfectly.”

“The last scene was quite impressive,” says Rammy. “We had a huge set that is the whole point of the story. This is where we reveal what he has stolen. It’s a film set, the crew are all working, he takes a Gemini 1x1 Hard out of the case and puts it on a stand. Then there is the gag, shown using a contra-zoom shot and a flashback – he has left the power cable behind – and that’s a neat way to show that it can be battery powered.”

For Joe, the last scene really highlighted the power and versatility of the fixture. “It was nice to show that you can light a big 10x10m scene using only 1x1 panels,” says Joe. “I had a quad array bounced into a silk and a dual array coming back through a grid cloth, I had individual fixtures with Snapbags and an Octadome to softly light the motorbike in the background.” He adds, “by that time I was just spoiled because I knew the 1x1 could do anything.”

The Octadome was a revelation for Joe. “It throws out an incredibly soft, beautiful light,” he says. “You might think that, to light your subject in an interview, you need a big Briese or a Dedo Octodome but you just can simply do it with a lightweight, compact Gemini 1x1 Hard.”

Joe – “The 1x1 completely changed my thinking, I missed them on my next shoot because they are so versatile – I’m converted.”

Rammy – “They’re small, powerful they just fit anywhere and pack a punch. Great for slow motion. It’s one small light but when you use all the modifiers and some imagination – one light does everything.” 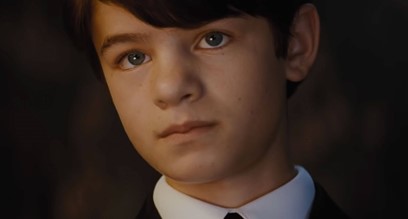